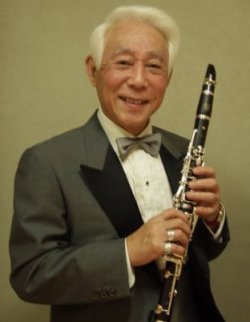 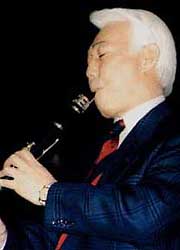 He also released 11CD. albums, "Full Clarinet", "Dream Dancing", "Jazz Party","Sketch", "Delivery", "Session", "Santa Clarinet", "Delicious","Vintage", "Session2", "Cookin' from his own label JAZZ COOK.
.Kitamura made his debut in 1951 and he has been recognized as Japan's
premiere jazz clarinetist for 49 years. Since 1968he has led his own quintetand for 16 years they performed, regularly, on "Morning Echoes", a Japanesetelevision program.

Eiji has been named Best Jazz Clarinetist in Swing Journal's annual Reader's Poll each and every year since 1959, and has appeared at the Monterey jazz Festival for the past 20 years.
He has also appeared at the Concord, Mount Hood, Scandinavian, Queensland
and Guiness Cork Jazz Festivals.
Eiji toured Australia and Japan with fellow clarinet legend, Buddy DeFranco.


Eiji has been described by Clarinet Magazine as "Japan's answer to Benny
Goodman.....a gentleman of personal charm and musical taste.
All the ladies wanted to cuddle him, and all the clarinetists wanted break
his fingers."